You have not added any favorites.

Falsterbo – a seaside resort with a long history

Beaches that stretch for kilometers and crystal-clear water. Children laughing and splashing in the water, sun that warms and a faint breeze that cools. School is out and it is holiday time. It is the 2020s in Falsterbo - a seaside resort with centuries of history on the southern coast of Skåne.

One can imagine what it was like back then in the infancy of the cold-bathing culture: Women with white parasols and men in straw hats stroll along the coast. The couples are radiant, they have had a lovely day with several health-promoting dips in the sea at the newly built bathhouses - women and men separately as prescribed by the times.

Christian Kindblad, chairman of Näset's cultural association Calluna, from whom we have loaned photographs and postcards, says:

When Strandhotellet opened in 1896, the cold-bathers began to travel to the town in earnest, but it was only with the opening of the railway between Vellinge and Näset in 1904 and the construction of the luxurious sea bathing establishment Falsterbohus in 1908, that the foundations were laid for a flourishing future. When Falsterbohus was rebuilt a few years later into a luxury hotel complex, the stage was set.

Families wanted to swim together. Decent women and men did not undress in public. The problem was solved by portable tents where changing into a swimsuit could be done modestly. The tents developed into simple bathing cabins and later into the characteristic bathing huts we see on Näset's beaches today.

When Strandbaden was built at the end of the 1920s, bathing possibilities were increased for those who did not have bathing cabins. Below the restaurant, you could change on the beach and there was also one of the beaches new attractions. A wooden slide which was more than ten meters high!

“For 10 öre you could rent a board to ride on and then it was just a matter of throwing yourself down the slide and surfing out to sea. If there was no guard in the area, clumps of seaweed were used as a "mat" down the slide. Perhaps even more spectacular was the iron ring you could rent at Falsterbohus, in which you could fasten yourself and wheel out into the water”, says Christian Kindblad.

A century of bathers left their mark

Over the following decades, a steady flow of prominent citizens from near and far would gather at Falsterbohus. During the latter part of the interwar period, and with the spread of the right of public access, the beginnings of the seaside resort we know today began.

“Holiday homes began to be built and later, in the fifties, more people were able to afford holiday entertainment in general. They invested in a car and by then it was easy to take the car to Näset for sunbathing and swimming”, says Christian Kindblad.

For more than a century, bathers have flocked to Falsterbo for white sand, shallow beaches and comfortable bathing. Falsterbohus was converted into condominiums many years ago, but its significance for the town's development can be clearly felt in Falsterbo's streets.

Falsterbo has developed from a small fishing community to an urban area with a village centre where many of the 20th century houses are preserved and renovated with respect, while Kallbadhusen has been replaced by Skanör Falsterbo Kallbadhus in Skanör's harbor. 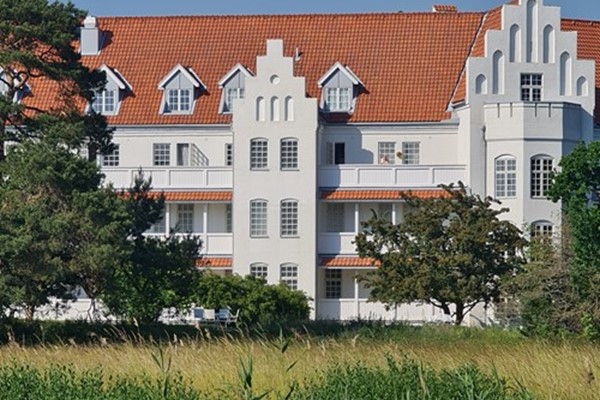 A special thanks to Näset's cultural association Calluna for lending us the fantastic photographs and postcards!

When you use our website, we store certain information. Mainly to make it easier for you and provide statistics to us.

More about how we process your data.

This website saves cookies in your browser so that we can give you a better experience if you visit us several times.

Most modern browsers (Google Chrome, Firefox, Edge, Safari, etc.) are automatically set to accept cookies, but you can choose to change the settings so that the browser does not accept cookies. If you do not accept the use of cookies at all, the website will not work optimally.